– said a twenty-something female walking past my cash register.

There are women who think once they’ve reached their sixties that they’ve lived a full life and done everything they’re going to do, and voluntarily go to the senior center to play Bingo and knit scarves.

I’m not one of them.

About a year before she passed away, I had lunch with my then ninety-four-year-old Mother at her “retirement home”.  Walking into the dining room Mom said to a little old lady sitting at a table near the entrance, “Hello. Are you new?”

“I thought I hadn’t seen you before. Welcome,” Mom said.

I still feel new. This year I had three new,  life-changing experiences.

I’ve followed Debra’s blog “Breathelighter” for about a year, after our blogging buddy Muchow honored both of us with the same award.

I’ve learned so much about the history of California from reading her posts.

Did you know that the correct name of Los Angeles is El Pueblo de Nuestra Señora la Reina de los Ángeles (the Town of Our Lady Queen of the Angels), and it was a Spanish pueblo founded in 1781?

It’s all described in Debra’s post My search for the Los Angeles Zanja Madre and introducing William Mulholland– thief or visionary?

Who was William Mulholland and did he steal the Owens River water for L.A.’s lawns?

Read the post William Mulholland and the Los Angeles Aqueduct–Are there lessons for the future? which begins, “Shady land deals are as much a part of California’s history as the Catholic missions and the Gold Rush.”

Debra posts could have been written by yours truly. Though I haven’t blogged about it – yet – I’m really concerned about the world-wide dwindling supplies of water, and am shocked how most of my neighbors who live in this desert-like, overpopulated part of the world, don’t care.

[Note: If you think you know something about California’s water wars and can’t remember where, you’ve most probably seen Roman Polanski’s 1974 movie “Chinatown.”]

I was nervous when I knocked on Debra’s front door, someone my mother’s generation would’ve called my “pen-pal”. I worried that it was going to be one of those awfully tense meetings when I wouldn’t be able to think of anything to say so I’d have to spend the afternoon with a smile plastered on my face, and I realized while I lifted my hand to knock, that I didn’t know what Debra looked like.  I “speak” to a flower not a person.

This is her gravatar.

As soon as Debra opened the door, we impulsively hugged each other, and then we both started talking at once, and then we laughed, and that’s all it took.  We spent the next five hours yakking, interrupting each other as if we’d been friends for years.

We discovered we are very close in age, were married a month apart, have similar tastes in food, and politics, like the same farm-yard animal [!], and though we may need bifocals to read, and the odd ache and pain, we’re ready for new adventures, and not the bingo table.

We ate a delicious lunch at one of my favorite lunch spots, Real Food Daily, in Pasadena. As it’s an organic vegan restaurant, I didn’t have to worry about food allergies.

After lunch we had time for a quick visit to the Huntington Library. Another place we both love to visit.

The Huntington Library, Art Collections, and Botanical Gardens, was founded in 1919 by rail magnate Henry Huntington who had a special interest 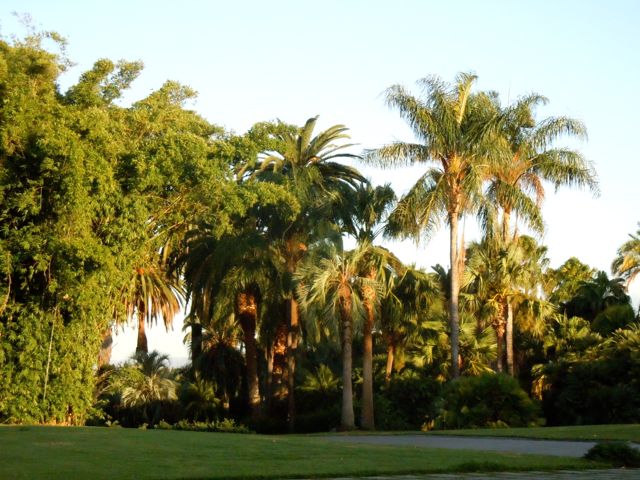 View of the Huntington gardens

We only managed to see the exhibit, “Just Cause: Voices of the American Civil War.”

The title comes from Abraham Lincoln’s parting words to his new general-in-chief, Ulysses S. Grant, in April 1864:  “And now, with a brave army, and a just cause, may God sustain you.”

The exhibition included prints, pamphlets, cartoons, letters and diaries of  soldiers, chaplains, surgeons, from both the North and the South, black and white, all of whom defended their own visions of the just cause.

Did you know that Walt Whitman spent three years caring for the wounded in a Washington hospital? The Huntington has his 1863 notebook…

I was particularly interested to read that the new Republican Party “was dismissed and ridiculed as an assemblage of wild-eyed radicals.” 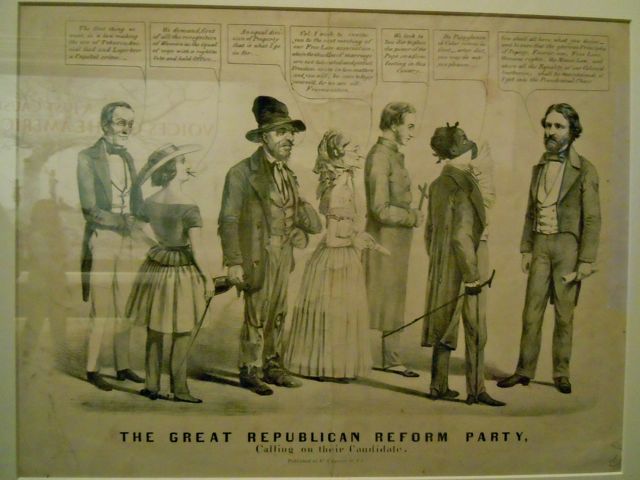 In the explanation for the above poster, the Republican Party president John C. Fremont is accused of pandering to the lunatic fringe of  American politics. The poster includes a prohibitionist, a feminist, a socialist, an adept of “free love”, a “papist” Catholic priest, and a black man who wished to elevate “De Poppylation ob Color” above the whites.”

Harpers Weekly celebrated the end of the war with this cartoon dated April 22, 1875.

Stay tuned, we’ll be returning to the Huntington to see the main exhibition: “A Strange and Fearful Interest: Death, Mourning, and Memory in the American Civil War.”

What about you, are you ready for new adventures? Have you met any of your blogging buddies?

I can’t imagine any blogger would be happy just to sit on the bench playing Bingo, but I could be wrong.

We think we need so much, when all we really need is time to breathe. Come walk with me, put one foot in front of the other, and get to know yourself. Please click the link to my blog - below - and leave me a comment. I love visitors.
View all posts by dearrosie →
This entry was posted in America, Tutto va bene, Wondering and tagged American Civil War, Huntington Library, Just Cause: Voices of the American Civil War., meeting my blogging buddy, Real Food Daily. Bookmark the permalink.

75 Responses to Are you new?