After our friends Frances and Mauro told us about tartuffo (truffles) they ate in Italy, and how only a few specially trained dogs are able to sniff them out under the ground in the woods, Mr F and I were intrigued to go taste them. Eetaly = to eat in our dictionary.

We spent a week in the Piedmonte region up in the north-west of Italy in October 2009.     Did you know Cinzano, Martini, solid chocolate bars, Lavazza coffee, Nutella, bread sticks, and The Slow Food movement all originated in Piedmont?

Map of the Piedmonte region

Our friend Frances who has a Master’s degree from the Slow Food University in Italy – founded “to promote awareness of good food and nutrition” – is fluent in Italian and is also an accredited wine sommelier, helped make our trip into a gastronomic success when she and her friend Manuela (also a sommelier) spent the weekend with us at an agriturismo in the Piedmonte region.

mushrooms for sale in Italy

Their food tour of the area included a Saturday farmers market, a truffle fair, an organic winery, beautiful hilltop towns with churches and terraced vineyards, plus an introduction to some of the best food we’ve ever eaten. 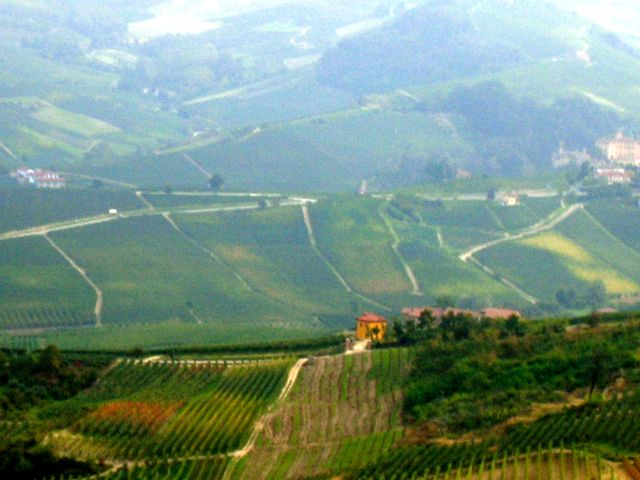 At each restaurant Frances patiently translated the menu for us, and explained what we should eat, and why, and we dutifully ate it all – bunny, goat, raw ground veal, Vitello tonnato (Veal with Tuna sauce) – and drank some of the best wines of the region, both still and sparkling (including Asti Spumante because Asti’s a town in the region), plus my good friend always explained my allergies to the waiters.

[Before we left for our holiday everyone asked me, “What will you eat?”   To be honest, I had no idea whether I’d be able to eat anything, I’m allergic to many foods which are a staple of the Italian diet, but I had no problems as all the meals we ate in Italy were freshly made without any artificial colorings or additives.]

selection of mushrooms for sale

We were fortunate that the weekend we visited Alba was the  “79th International Tartuffo Bianco (White Truffle) Fair“.  Dozens of truffle vendors had gathered to sell their wares. 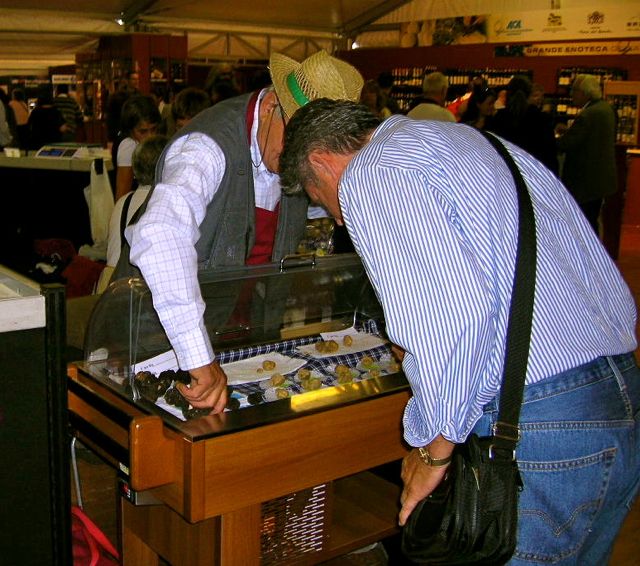 Mr F and I ate tartuffo (truffles) at Osteria Italia in a little hilltop village near Alba, with Frances,  her cousin Paulo (who is the editor of an Italian food magazine), his wife, and Manuela.  It was one of the best meals I’ve ever eaten. I enjoyed it so much I forgot to photograph my food. 🙂

We were told the best way to appreciate truffles is with an egg, and the second best is with pasta.

Both were excellent choices.

Paulo selected the tartuffo for us from this platter. It was weighed right at the table on the silver thing, which is a scale… 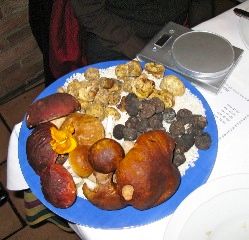 The white truffle he chose was the size of a prune and cost 42 Euros! (If I’d understood Italian I don’t think I would have ordered it.)

When the server brought me my plate of freshly-made-Italian-pasta and grated the tartuffo for me it looked and smelled so delicious, and I was so delighted I said, “Oh my god!” as I admired it.

The server, a sweet young woman in her twenties, clapped her hand to her mouth, squealed and said something rapidly in Italian to which everyone at the table laughed, and then she ran back to the bar counter and said something to the three people working there and they all stopped what they were doing and stared at me.

“What just happened?” I asked my table companions. “Did I do something?”

“You said ‘ohmygod!'” Frances told me.

“There’s a very funny commercial playing on TV at the moment where an English woman says ‘Oh my god!’ several times. The young woman serving us had no idea that English people really said it. She thought it was just a joke.”

Hams hanging from the ceiling in a tiny deli. Another ohmygod moment.

Truffles stink like old socks, but when you eat them they have an intense earthy-musty flavor that is delicious!

Have you eaten tartuffo, or had an ohmygod experience in a foreign country?

If you’d like to see some of the other WordPress Weekly Photo Challenge posts on “Foreign”, click here

We think we need so much, when all we really need is time to breathe. Come walk with me, put one foot in front of the other, and get to know yourself. Please click the link to my blog - below - and leave me a comment. I love visitors.
View all posts by dearrosie →
This entry was posted in Not America, Photography, Tutto va bene, Wandering and tagged Alba, Asti Spumante, International White Truffel Fair, Photography, postaday, tartuffo, truffles. Bookmark the permalink.