Museum Musings: the crowds poured in from Patagonia, Siberia and India

If you wonder why I haven’t posted much recently it’s because we are having one of the busiest summer seasons at the Museum, and I come home too exhausted to write. 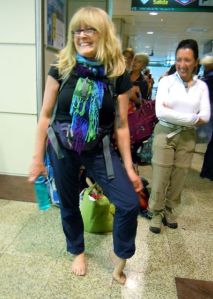 Last week I overheard a Security Guard telling a woman to put shoes on her 18 month old baby.

“You aren’t allowed to be barefoot in the museum,” was the answer.

That sounded ridiculous to me.   I walked along the Camino with Sue Kenney who walked the route barefoot,  and I photographed her when she walked “sin zapatos” off the plane into Madrid airport.

Yesterday I was surprised and happy to see a woman walking barefoot past my Satellite Store into the galleries. I’m delighted to report that no one kicked her out.

We think we need so much, when all we really need is time to breathe. Come walk with me, put one foot in front of the other, and get to know yourself. Please click the link to my blog - below - and leave me a comment. I love visitors.
View all posts by dearrosie →
This entry was posted in Museum Musings, Photography, Tutto va bene and tagged Museum, Patagonia, Photography, Salekhard, Siberia, Sue Kenney, walking barefoot. Bookmark the permalink.

43 Responses to Museum Musings: the crowds poured in from Patagonia, Siberia and India