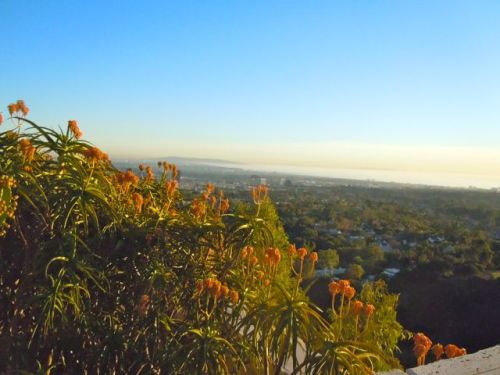 1. “Why are we spending all this time shopping before we see the museum?” a little boy asked his mom, who ignored the question. 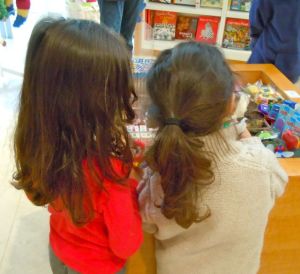 Which one is Daniel? Clue: Aria's five and Daniel's three-and-a-half

Aria was shy, but Danielle was a confident and friendly little girl and kept coming over to show me her pile of goodies. She liked the sharpener-camera, but was particularly thrilled with the wind-up flash light.

Son? Oops. Even though the kid’s hair was in a long pony tail, this cute little one wasn’t “Daniella”, but “Daniel”. A he.

Of course I couldn’t keep quiet. “He’s got beautiful hair. Is there a fashion in Los Angeles for young boys to have long hair?” I asked his mother.

“I don’t know,” she said, “Daniel had a couple of bad experiences with hair cuts so we just stopped giving them. It made life a lot easier.”

“Are you always going to keep his hair long like this?” I asked.  I had to ask her, because I knew you’d want to know…

“No,” she said, “We gave him the opportunity to decide what he wants to do, and he’s decided to have his hair cut when he turns four.”

“At the end of this month,” she told me, “His birthday’s a Friday so we’re going to have a hair cutting party. We’re hoping to give his hair to charity, but there are specific requirements like minimum length, and I’m not sure it’s long enough.”

All this time Daniel and his older sister were shopping and ignoring us. After I was given permission to take their photo, Mom took a photo of the kids with me.  She promised to come back after Daniel’s had his hair cut. We all did the fist-pump handshake and the kids said a very polite, “Goodbye Miss Rosie,” before they left.

4. About an hour later, I met this very elegantly dressed young lady wearing a hat with hair down her back, who told me she was five and her name was Vionney. I wasn’t sure how to spell her name.

“I can write my own name,” she told me. I photographed her while she slowly and carefully wrote it out for me. What a shame I can’t show you the piece of paper, or the way her tongue stuck out as she concentrated on her letters. 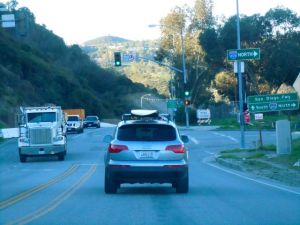 I took this photograph at 8:15 yesterday morning.

With temps in the 80’s I knew he wasn’t on his way to work with a surfboard strapped to his roof-rack.

6. Two friends Suzanne and Jill both from L.A had a lovely day at the museum. They took my photo. I expect I’m on their Facebook page.

8. The traffic was very light going to work this week – many people are still on vacation  – so on Wednesday I used the half-hour as a gift and spent it in the garden. 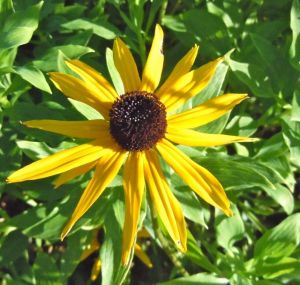 9. Evan who is nine asked me, “Do you know that it’s the Chinese New Year next week?”

“And do you know this is the year of the Dragon?” he asked.

I didn’t know that.

Evan knew the difference between the Chinese dragon (all things good) and the fire-breathing European dragon who must be slayed, but he couldn’t tell me why in European stories the dragons are always considered bad.

According to my informant Evan, everyone wants their baby to be lucky, so there will be many Chinese babies born this year.

I didn’t know that.

yesterday at 4 pm the sun was so bright, the ocean was yellow like butter

We think we need so much, when all we really need is time to breathe. Come walk with me, put one foot in front of the other, and get to know yourself. Please click the link to my blog - below - and leave me a comment. I love visitors.
View all posts by dearrosie →
This entry was posted in Families don't you love them, Museum Musings, Photography, The Natural World, Wondering and tagged boy's with long hair, Chinese dragons are lucky, Chinese year of the Dragon, European dragons must be slayed, flowers, high temperatures in L.A. this week, long hair, Photographs. Bookmark the permalink.

22 Responses to nine Museum Musings: including summer weather in January, and more kids with long hair