Museum Musings: Centurion card, summer school, tutu’s, plus dogs in cars are all in a day’s work

In all the years I’ve worked at the Museum, I’ve seen a black (titanium) American Express card less than a dozen times.

Available by invitation only, The Centurion Card is the world’s rarest American Express Card and confers a level of service that can be extended only to selected individuals worldwide.

A man used one on Tuesday. He came from Guatemala, one of the poorest countries in the world.

“Quickly hide this,” said an older woman with a British accent passing me a fancy bar of soap, “I’m buying it for my sister and I don’t want her to see it.”
I’m fast. I quickly put it in a plastic bag which she slipped into her handbag, and then took her money.
Five minutes later her sister, who spoke with the same posh British accent, came to my register and bought the same bar of soap.

One day last week I saw a couple of policemen walking around the museum. “Is anything wrong?”  I asked

“Someone locked their dog in their car in the parking garage. It’s much too hot to leave a dog in a car, we came to give them a fine.”
“How did you find the owner?” I asked.
“We phoned the number on the dog’s tag.” 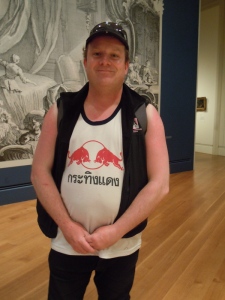 Marcus is from Adelaide, S. Australia.  His tee-shirt says “Red-Bull” in Thai

About 300 students aged fourteen to seventeen from the Summer Discovery Program at UCLA visited the Museum on Tuesday.

The kids I chatted with  all spoke perfect English 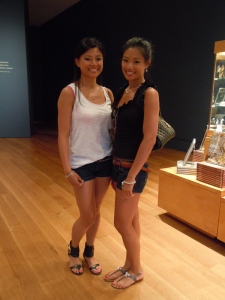 Some of the kids I met this month:

A three-year-old boy who wanted a ballerina tutu, and his Mom bought it for him.

Destree who is three-and-a-half.  “I named him after the movie “Destree Rides Again. We call him Des,” his Mom told me.

Callie from Nashville. Her granny bought the earrings for her

Anna Marie (seven-and a-half) who lives in the Valley helped me invent the  putting away the postcards game.

I heard all about Hong Kong from Zoe (7) and Emily Rose (6) “who are from Australia but have lived in Hong Kong since they were born”.

We think we need so much, when all we really need is time to breathe. Come walk with me, put one foot in front of the other, and get to know yourself. Please click the link to my blog - below - and leave me a comment. I love visitors.
View all posts by dearrosie →
This entry was posted in Families don't you love them, Museum Musings and tagged American Express Centurion Card, ballerina tutu, black titanium visa credit card, Centurion card, dogs locked in parked cars, poorest countries in the world, Summer Discovery Program at UCLA. Bookmark the permalink.

23 Responses to Museum Musings: Centurion card, summer school, tutu’s, plus dogs in cars are all in a day’s work