The middle-aged French couple stood in front of my cash register for some time while they deliberated whether to purchase the half a dozen art books in their shopping basket, he wanted to buy them all, you could see he loved art by how carefully he turned the pages, but she explained that firstly, they already had too many art books at home, and secondly these were too large, and too heavy to go in their suitcases, and reminded him, very sweetly too, how expensive postage on art books could be, so he gave them all back to me, and bought the Museum Handbook, a relatively small book , instead.

He paid with a Visa card.

When someone pays with a credit card I check the name. If my customer’s a woman, and the name on her card is “Mark”, I  ask, “Where’s Mark?”  He’s often standing next to her,  sometimes waiting on the bench outside the store, but very often he’s “at home”.  You’d be amazed how angry some women get when I don’t allow them to use Mark’s card, if Mark isn’t there.  Sheesh!

Of course, this being Hollywood, I also look at the name, because you never know who may be standing in front of me.  A few years ago I thought the woman at my register looked like Joan Rivers  – I recognized her distinctive little nose and way of speaking – but I wasn’t sure, she looked too “young”, there were no wrinkles on her perfect face, and as we aren’t supposed to say “What an honor to serve you” to the rich and famous, I couldn’t ask her.  Thankfully she didn’t leave me guessing, as she thoughtfully paid with a credit card, and there was her name: Joan Rivers. (Now I know what cosmetic surgery looks like up close.)

I also enjoy the challenge of identifying the credit card’s country from the few clues, like Air France or Lufthanza Air Miles, or the name of the bank, “Banco Roma” is easy, but “Standard Bank” doesn’t tell you anything, and “Royal Bank”, isn’t British, it’s Canadian.

So when the French tourist (who didn’t buy the art books) gave me his credit card, his name didn’t ring a bell for me, but I knew their bank was Canadian, and in a friendly gesture to a couple of art lovers, I asked where they lived in Canada.

Monsieur said, “We live in France and Canada.

I guessed Quebec, but I was wrong, they were from Ontario.

“Do you know Ontario?” he said.

“Yes, I have relatives who live there,” I said

They lived near Bayview Village. “I know the area.” I said,  “Do you recall that very heavy downpour a few years ago when the storm drains backed up, leaving several miles of the city knee deep in water? ”

“Yes, many houses flooded in that storm,”  said Madame.

“My friend Lynn and I were stranded in the mall that afternoon. It was horrible. ” I said

“Our next door neighbors were also stranded there.” said Monsieur, then turning to his wife he said, “She looks like M—, don’t you think?”

“I’m talking about M– -W–,” he said picking up his book, and turning to leave.

“What a coincidence,” he smiled warmly, “We were at their place not so long ago. Had a lovely evening.”

“Who are you? Who’m I talking to?” I hadn’t recognized the name on his credit card, but I don’t know all my sister’s friends.

“We’re actually friends of your mother’s,” he said. “Our name is S–”

“You’re the S–s?  My mother’s told me so much about you, it’s wonderful to finally meet you.”   I said, and went round to hug these strangers, who were now my good friends.

We took a photo for my Mom… 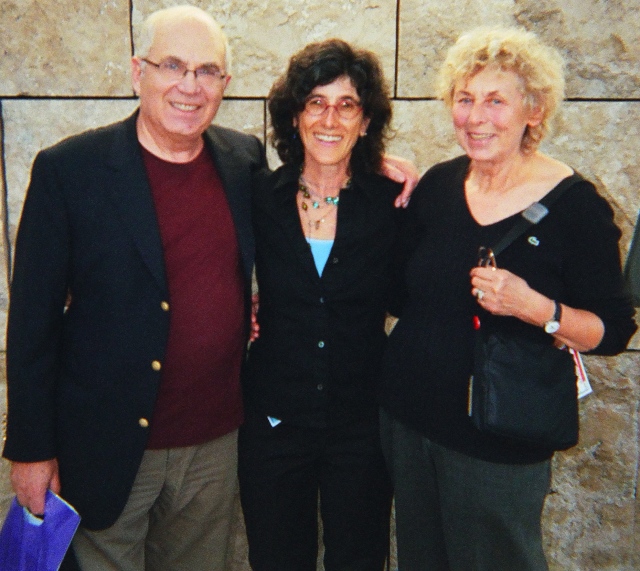 We think we need so much, when all we really need is time to breathe. Come walk with me, put one foot in front of the other, and get to know yourself. Please click the link to my blog - below - and leave me a comment. I love visitors.
View all posts by dearrosie →
This entry was posted in Families don't you love them, Museum Musings, Wondering and tagged Canada, Joan Rivers, Where's Mark. Bookmark the permalink.

13 Responses to Museum Musings: the French couple, and Sister M…